The research on R-AP is the first work to thoroughly investigate the effects of adversarial perturbation on RPNs.

Algorithm: designed a loss function that combines (i) label loss and (ii) shape loss, each of which targets a specific aspect of RPN. In contrast to previous attack paradigms that only disturb object class label predictions, our method not only disturbs the proposal label prediction in RPN, but also distracts the shape regression, which can explicitly degrade the bounding box prediction in proposal generation.

If a RPN is successfully attacked by an adversarial perturbation, such that no correct proposals are generated, the subsequent process in the object detector and instance segmentation pipeline will be affected by design.

All mainstream deep proposal-based object detectors and instance segmentation algorithms rely on a few standard RPNs to provide proposals for subsequent processes. Once the RPN is disturbed, the performance of these deep models is naturally degraded. As such, our R-AP method is suitable in nature for black-box attack to these models, i.e., without the need to know their implementation details.

R-AP's goal is to seek an minimal adversarial perturbation added to image to fail a RPN. The loss function in R-AP is designed as the summation of:

(Peak Signal to Noise Ratio) is employed to evaluate the distortion of adversarial perturbation, because it is an approximation of human perception of image quality. (The higher the better - image-quality-assessment)

Finally, the R-AP algorithm generates a perturbed image by optimizing the following loss as:

The label loss is given by:

In other words, minimizing this loss is equivalent to decreasing confidence score of positive proposals.

The goal of shape loss is to explicitly disturb the shape regression. is defined as:

where are large offsets defined to substitute the real offset between anchor boxes and mached ground truth bounding boxes. By minimizing this equation, the R-AP method forces predicted offset approaching respectively, such that the shape of the bounding box will be incorrect.

The R-AP method is evaluated on the MS COCO 2014 dataset. 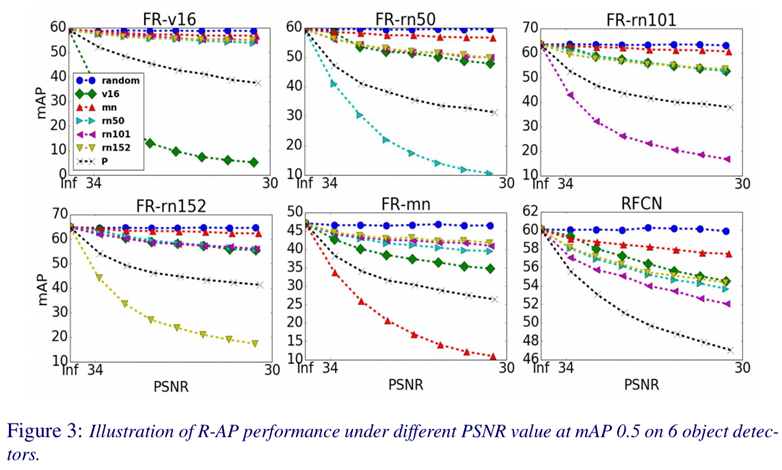 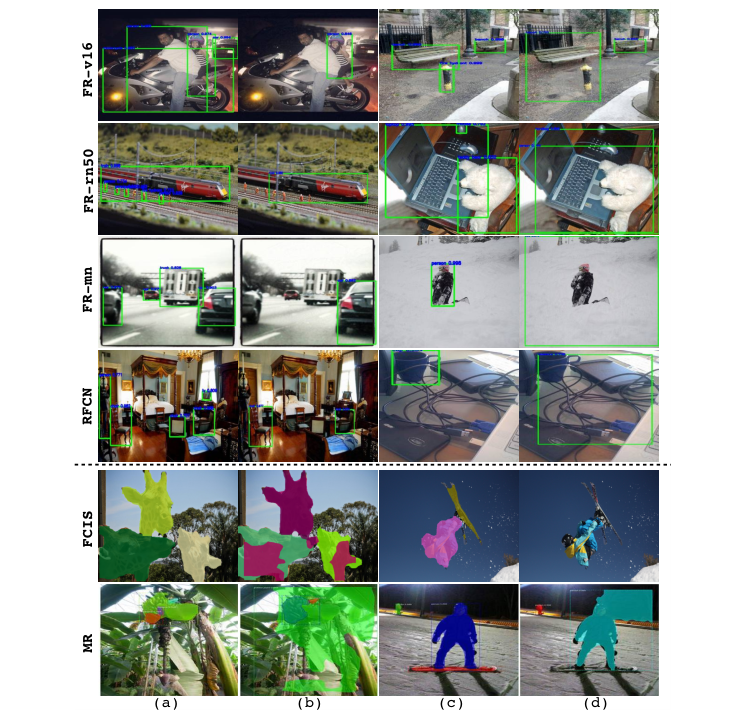 The R-AP method designed a new loss function to not only disturb label prediction but also degrade shape regression. The design of shape loss and the use of PSNR is worth noticing.